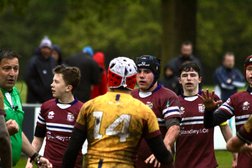 Old Silhillians u15s vs Newport & Salop
21st May 2021
Not wanting to over egg this one, remember the date and where you were when these two mighty rugby powers met. If you had paid for a ticket to watch this one you would not have been disappointed. Pouring rain and a blustering wind might have made you think the gods were trying to stop this one but it was going to take more than wind and rain.
Really special to see the whole Sils team out supporting the match day squad. Warm up was a simple affair of handling drills, line out practice and stretching then back in the changing rooms for a quick team talk then out onto the pitch for the first half. Newport brimming with confidence, well drilled and eager to make their mark.
It was apparent very quickly this was going to be a really big test of both teams resolve. Sils athletic forward pack versus and equally impressive Newport forward line and from the off it was pretty even , Tom, Will, Josh L and Ollie meeting fire with fire supported by the crazy gang of Ted, Josh B, Hugo and the force of nature Pembo. I’d like to say more but the first half was an absolute belter with both sides giving it all. The Sils backs defending hard with Charlie, Monty, Alex, Ben, Brendon, George and Tom working at full speed to defend and counter attack. Tom and Ollie working together on the right wing culminated in Ollie driving Newport back to within yards of their own line but some great defensive work saw them turn the ball over and clear their lines. Finally a chink of light, penalty to Sils who decide to kick at goal but the pouring rain and gusting wind forced the miss. The first half drew to a close 0-0 but probably one of the best no scores you will see.
Second half saw Ross replace Charlie at 9 with Ciaran, Alex Rose, Arjan and Matt L all taking their positions. First ruck saw Ross hit by the offside Newport forwards, welcome to the party. Newport subs at half time saw a bit more energy in their attack and Sils worked really hard to keep them at bay. The Newport 11 and 15 starting to look menacing with powerful runs and some great accurate kicks to touch. By now Sils were starting to feel the pace, couple of little handling errors, a combination of weather and Newport line speed saw the visitors eventually break the deadlock on 37 mins with a lovely dummy to slip a stretched Sils defence 5-0 to Newport with a missed conversion. Sils really started to turn the screw but some strong Newport rucking saw progress slow and on 46 mins a loose ball on the floor was snapped up by Newport who ran in their second under the posts for a converted 7 points to make it 12 nil with 10 mins to play. Now anyone who knows this Sils squad knows a nil score is not going to happen. Sils battered and bruised changed tactics and were starting to make ground fighting for pride, themselves the coaches and fans. Newport starting to get rattled for the first time, visibly tiring as the mighty Sils started their comeback and despite a line out over throw and knock on Arjan and Tom D were working hard. Sils eventually with a well formed ruck out right saw a moment of absolute clarity when Ross went right to the blind side to Monty who drew his man beautifully to hit big Will on the wing. The Newport 11 finally meeting his match saw Will smash over the line 12-5, the whole Sils squad pumped and back in the fight. Conversion just missed despite a beautiful connection. Newport by now were starting to question each other asking the ref how long left. Music to Sils ears. The next few minutes were a blur, Newport kicking Sils back but relentless Sils ploughing forward. The pressure eventually telling with a yellow card for not rolling away saw Newport down to 14 men. Time was running out, Sils were giving their all when a break left by Tom D resulted in a ruck just short of the line, Ross hit Tom M who like a bull in a China shop smashed all comers to score Sils second much to the
delight of Sils. Newport hands on heads in despair. 12-10 to Newport last kick of the game to draw level. All of a sudden silence descended and everyone held their breath. Up steps Monty looking confident, small pinch of grass in the air to check the wind. Despite the come on Newport shout just as he reached the ball he hit it sweetly, arm aloft it seemed to take an age, everything in slow motion Newport all turning to face the direction of the kick. The wind gusted and the ball dipped, hit the crossbar and over it went, boom 12-12 at which point the whole of Sils erupted into howls of delight, Monty trying to look nonchalant but fooling no one, whilst a bewildered Newport looked on in disbelief.
An absolutely fantastic match both teams should be extremely proud of their performance.
Share via
FacebookTwitter
https://www.silhillians.com/te
Recent news